YANN CLEARY, Lollipop Music Shop X
The freezing Mistral wind was blowing over the city. The central district, where I had booked a room, was offering the vision of an end of the Western civilisation : neglected buildings, pervasive poverty, invading dirtiness, loads of homeless, starving migrants begging for some food... Was that what was remaining from the second town of France ? A kind of Third World city? Add to this that Zemmour, the neo-fascist guy who would probably become the next French president, was also in town, blaming all politicians and shouting after fifty years of French social-democratic carelessness, and the punk frame was all set down.
Between two wobbly buildings covered with scaffolds and forestays, the little Lollipop Music Shop x was still standing up, facing up the global collapse. Rock'n'roll was said to be the last adventure of the modern world, wasn't it ? The shop was the kind of friendly, warm place that immediately made me feel better : good music, associative bar with regular customers, trays full of 7inch vinyls, nice talks with the shop seller, a rocker in his late forties who was trying to weigh my taste :
- What's that record behind you ?
- Oh, that's the Olivensteins, one of the best French punk band, ever! A must-have !
- Well, not this one... The one alongside...
- Ah ok, désolé ! That's a French singer, he sings like Daho, he used to sing in a rather unknown punk band a few years ago.
- Gossh ! You describe me the guy in Police Control, don't you ? May I check that, please ?
Et Cetera... I even managed to leave there the very last copies of the first issue of my fanzine.
I also had the uninhibited joy to discover that the pocket book Pachuco Hop (Mono-Tone Editions, 2020) had finally been released. It was the compilation of all the disillusioned, but so hilarious rock'n'roll reviews, written by Pascal Escobar in the French fanzine Dig It ! The author, who used to play the guitar in Bleifrei and Gasolheads, was part of a new generation of French writers who had roamed the punk slums since the early 90's : Frédéric Ploussard (Mobylette, Babelio Ed.), Thierry Pelletier (Les Rois du Rock, Libertalia Ed.)...
Talking about Bleifrei, Gasolheads, Sugarfix... All those bands from Marseille had released their first records on Lollipop Records in the late 90's and I had discovered them via the mailorder list of Dialektik Records when I was a huge fan of Zabriskie Point. A bunch of great 77-punk records had followed (the Hatepinks, the Neurotic Swingers, the Wild News' compilations, the Briefs' re-releases, the Aggravation...) and had definitely broadened my disc collection, before I moved to some more international labels... 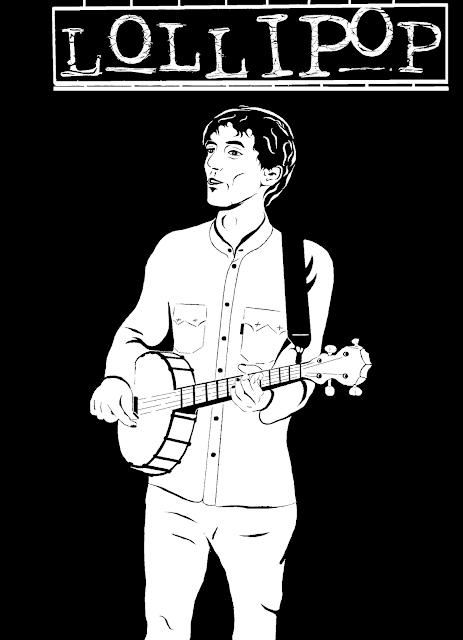 With the night, a small crowd of rockers with grey hair gathered in the shop for the showcase of the local artist Yann Cleary, a smart looking-like guy with a humble, kind attitude. He played a 45-minutes set of sensitive pop and intimist folk, while standing-alone with his guitar and singing, with a perfect English accent, some epic adventures from his lost life in Japan. The whole thing had the pleasant side of some nostalgic songs of Jonathan Richman, coupled with the voice of the singer of Supergrass. Special mention for the banjo play of his most famous song NES My BFF. He released his first Lp, Tokyo, in 2015 on Sounds Like Yeah ! Records x, the label of Laurent Garnier himself and two friends of him.
The disruptive dive back into the gloomy streets of Marseille, was a total contrast with the moving, perched show of Yann Cleary, or with the peaceful, quiet stay in the Provence hinterland of the week.
Publié par Olive the Jerk à 01:27 No comments: